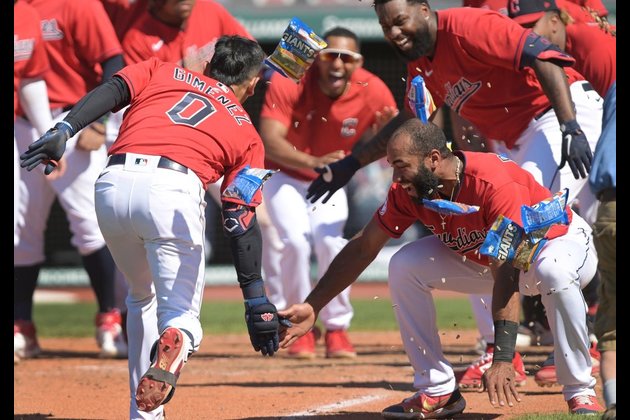 The Cleveland Guardians celebrated a two-run, walk-off home run for the second consecutive day when Andres Gimenez's blast in the ninth inning shocked the visiting Minnesota Twins and secured a 5-3 victory Thursday.

Gimenez's ninth home run of the season came with two outs and traveled an estimated 411 feet to right center. It touched off a wild celebration by the Guardians near home plate.

Teammate Josh Naylor ripped a two-run homer on Wednesday to defeat the Twins 7-6.

Closer Emmanuel Clase (2-2) earned the win on Thursday by pitching a scoreless ninth.

The Guardians rallied for two runs in the eighth on just one hit. Thornburg hit Gimenez with a pitch and walked Franmil Reyes and Sandy Leon to load the bases. Myles Straw hit a sharp grounder between short and third. Shortstop Carlos Correa made a diving stop but threw wildly at third. Gimenez scored on the infield single and Reyes came home on the throwing error to tie the score 3-3.

Minnesota right-hander Chris Archer -- a Cleveland draft pick back in 2006 -- allowed only one hit, a single to Jose Ramirez in the first. However, he lasted just four innings, walked six batters and struck out two. Archer threw 90 pitches, 45 for strikes.

Guardians starter Shane Bieber was unable to get the job done, either. He pitched six innings and surrendered three runs, five hits and two walks and struck out five. It was his fifth attempt at getting his fourth win on the season.

The Guardians took advantage of Archer's wildness in the second. He walked four straight batters, including Steven Kwan with the bases loaded, for a short-lived 1-0 lead.

The Twins then jumped on Bieber for three runs in the third. Jose Miranda's three-run double into the gap in right center scored Luis Arraez, Correa and Max Kepler for a 3-1 advantage.

Cleveland climbed one game behind Minnesota in the American League Central Division. The Guardians won the five-game series 3-2.

OTTAWA, Ontario: Military trainers from Canada will head to the United Kingdom to teach Ukrainians new techniques for fighting the ...

The Pittsburgh Pirates are fresh off a rare win over the Arizona Diamondbacks and now look to gain a split ...

Cardinals out to continue hot stretch vs. Rockies

A seven-game winning streak vaulted the St. Louis Cardinals into first place in the National League Central, but their grip ...

That Dylan Cease All-Star Game snub looks worse by the day, with the Chicago White Sox right-hander still sporting a ...